SWITCHING CHEESE WITH VIOLIFE MEANS TAKING PART IN VEGANUARY IS A PIECE OF (PLANT-BASED) CAKE!

2020 is set to be the biggest Veganuary yet [1], but for those new to plant-based living giving up the food you love may seem like a daunting prospect. For the nation’s cheese-lovers however, Violife, the plant-based alternative to cheese, is here to make it even easier to give up dairy this January!

Launching this Veganuary is Violife’s new EPIC Mature Cheddar Flavour Block, available at Waitrose nationwide for £2.10 as an introductory offer. Hailed as the closest thing to mature cheddar ever made, this new-generation dairy free block is set to transform how you enjoy a plant-based diet. 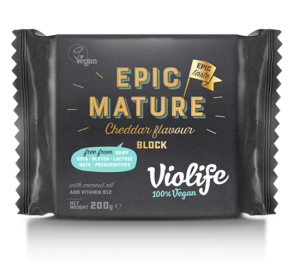 Not only does it look and taste like the real thing but it also feels, crumbles, grates and melts just like cheese too. It is truly EPIC!

Mouth-wateringly delicious, the EPIC Mature Cheddar Block is a versatile, staple ingredient for your everyday meals. Enjoy served on a cheeseboard as the perfect accompaniment to a glass of wine, or add to your favourite recipe for a delicious cheddar like taste.

But Violife is not just for Veganuary, with over 50% of those that took part in Veganuary in 2019 who continued their vegan journey citing the discovery of great tasting food as their reason for doing so [2]. There are many reasons why people might be looking for a plant-based alternative to cheese, from committing to a vegan lifestyle to those with food intolerances, and Violife makes giving up dairy easier than ever before. 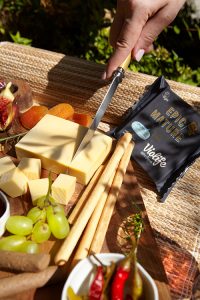 Violife’s range of delicious dairy-free alternatives to cheese are fortified with vitamin B12, free from preservatives and GMO’s as well as all common allergens, including dairy, lactose, gluten, soy and nuts, meaning they can be enjoyed by everyone regardless of their dietary requirements.

Zoe West from Veganuary commented: “We’re thrilled that Violife are launching such a fantastically tasting cheddar cheese alternative. Their EPIC Mature Cheddar Flavour Block means that it’s now easier and tastier than ever before for people to make the switch to plant-based cheese-alternatives and still enjoy their favourite meals without having to compromise on EPIC taste!”

Violife’s EPIC Mature Cheddar Flavour Block is hitting the cheese aisle of Waitrose from 15th January - just in time for you to pick up and enjoy this Veganuary.

Blog18
Events7
News22
Recipes0
Copyright © 2019 - violifefoods.com
Developed by Netwise D.M.C
We use cookies to ensure that we give you the best experience on our website. If you continue to use this site we will assume that you are happy with it.YesNo
Revoke Cookies